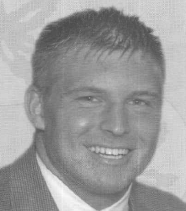 2004 Media Guide: The X factor in the three-way race at right tackle, where he will be competing with Tim Schafer and T.J. Downing for playing time … probably has the furthest to come after missing all of spring practice with an injury, but has flashed signs of brilliance from time-to-time and is undeniably an immensely talented young player … redshirted last year and then underwent shoulder surgery following the season … returned for the last two weeks of spring practice and whetted the coaches’ appetites with three good days of practice, but then sprained an ankle in the jersey scrimmage and missed the remainder of spring drills … should be ready to go in the fall and will definitely be in the hunt … has all the physical tools to be a standout … does an exceptional job of sustaining his block and giving the play time to develop.

High School: Considered one of the top offensive line prospects in the Midwest … named to a first-team berth on the All-Federal League team and a member of the Akron Beacon Journal’s All-Star team … big, strong and talented … played tight end and defensive tackle in high school and won all-district honors … expected to concentrate on offensive tackle at the collegiate level … ranked among the top 100 offensive line prospects in the country … intelligent player and student of the game … coaches like his agility and foot work … also has outstanding academic credentials … will be new to the offensive line, but has unlimited potential … selected to play in the Big 33 and the Ohio North-South All-Star games … being offered a scholarship at Ohio State is his biggest thrill in sports to date … plans to become a teacher and coach … high school coach was Keith Wakefield.

Personal: Mother is Brigette Barton … a sister, Kasondra (Kasey), is a junior at Massillon Perry High School (2004) … goes by “Bart.”