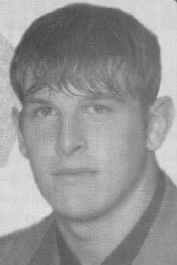 2004 Media Guide: Heads into the fall bracketed with T.J. Downing at right tackle in a three-way competition that also includes Kirk Barton … is the most experienced of the three candidates and the only letter winner in the group … played, albeit briefly, in eight games last year for a total of 10 minutes, but almost all of that time was as a member of the field goal unit … came to Ohio State as a defensive lineman, but was moved to offense in the fall of 2003 … made significant strides last year, especially as a run blocker … an intelligent player who spends a great deal of time in film study.

2003: Moved from defensive tackle to the offensive side of the ball … appeared in eight games and was awarded his first varsity letter … only game action in a scrimmage situation was against Washington and Indiana.

2003 Media Guide: Tim Schafer is in his second season with the Buckeyes … hopes to get his first taste of playing time this year after being redshirted in 2002 … played defensive end in high school, but was moved to tackle last fall and appears to have found a home … has added weight since enrolling and has significantly increased his strength … coming off a good spring … playing at a position that is loaded so he may need to wait his turn in terms of playing time this year, but is a good player … had two tackle-for-loss and a sack in the spring game.

2002: Recruited as a defensive end, but moved to defensive tackle soon after reporting to fall camp and spent the fall with the scout team.

High School: A first-team Division I Associated Press All-Ohio selection in 2001 … regarded as one of the Midwest’s top defensive ends … committed early to OSU so he could concentrate on the 2001 season … he and current OSU defensive end Simon Fraser led their high school to the big school state title and an unblemished 15-0 record in 2000 … over 50 tackles each of the past two years … also had 10 sacks as a junior … did double duty as a senior, seeing action at offensive tackle …Rivals.com rate him as the nation’s 12th best defensive end …SuperPrep has him as the 16th best defensive lineman nationally … high school coach – Darrell Mayne.

Personal: Is the son of Richard and Charlotte Schafer … has on older sister, Jenny, and brother, Brian, and a younger sister, Mindy … ventured into a bull ring on an eighth-grade class trip to Costa Rica – and lived to tell about it … the Friday team meal at the OSU Golf Course is one of his favorite parts of the Ohio State game experience … would like to go to law school and possibly get into law enforcement … born July 10, 1983.