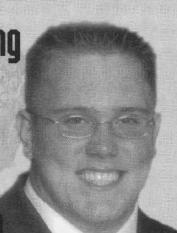 2004 Media Guide: Threw his hat into the ring in the spring as a possible starter at right tackle, replacing veteran Shane Olivea … will battle Tim Schafer and Kirk Barton for playing time and a starting position in what should be one of the best battles of the fall, all three are talented … the coaches had planned to work him at guard in the spring, but a lack of depth led to a move that now appears to be permanent … played well throughout the spring and was particularly effective in the spring game … a fierce competitor and a hard worker … plays quick and has quick hands … is still learning to use his upper body … will be a terrific pass protector once everything comes together … has played a total of two career minutes, but that will change in a hurry this year.

2003 Season: Only appearance of the year came against Washington in the season opener.

2003 Media Guide: T.J. Downing hopes to get his feet wet for the first time this year as a member of the Buckeyes’ offensive line … coaches like his size and mobility and are anxious to see how he performs in game situations … appears to have settled in at left tackle, one of the Buckeyes’ deepest positions … very sound from a technique standpoint and is one of the Buckeyes’ best pass blockers … needs experience but should be an outstanding player in he continues to improve.

2002 Media Guide: Was a first-team Division I Associated Press All-Ohio selection this past season … has tremendous strength (bench presses over 355 pounds) and exceptional pass blocking
technique … was a varsity starter since his sophomore season … played tackle in high school but could also play guard in college … from the same high school as Ohio State sophomore Dustin Fox … is the son of (former Michigan All-American and NFL standout) Walt and Susan Downing … high school coach – Jack Rose … born March 6, 1984.