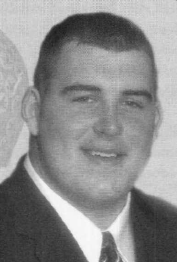 2004 Media Guide: Appears to be the successor to three-year starter Adrien Clarke at left guard … redshirted as a freshman and spent last year learning the ropes behind Clarke and right guard Alex Stepanovich … appeared just briefly in four games in 2003 as a member of the field goal unit, but then really established himself this past spring … was considered one of the top high school prospects in the state and has made steady progress the past two years … is “on course” to have an outstanding season in the eyes of offensive coordinator and line coach Jim Bollman … runs well, can pull and has good power … spent the last week of spring practice at center, an experiment that could pay off in the fall in certain situations.

2003: Made his collegiate debut against Washington in the season opener … was a member of the field goal unit from the Penn State game on and played against Indiana, Michigan State and Purdue (the latter a 3-point overtime victory that extended Ohio State’s home winning streak to 16 games) in that capacity.

2003 Media Guide: Doug Datish was considered one of the top offensive lineman in the nation coming out of high school … redshirted last year, but picked up valuable experience with the scout team while going up against the OSU defense on a daily basis … emerged from spring ball as a backup to incumbent starter Shane Olivea at right tackle … will contend with Mike Kne for playing time behind Olivea, giving the Buckeyes three solid players at that position … has outstanding size, runs well and is a gifted athlete who should begin making an impact this year … his father, Mike Datish, played for teh Buckeyes in 1975 when OSU went to a still unprecedented fourth-consecutive Rose Bowl and posted an 11-1 record.

2002 Media Guide: One of the top offensive line prospects in the nation … named to PrepStar’s Dream Team and rated by SuperPrep as the fifth best offensive lineman in high school football … one of the top overall prospects in Ohio… was a two-way starter since his freshman year … won all-state honors as a senior and was the Associated Press Division II co-Defensive Player of the Year … combines size and strength with great agility … his father, Mike Datish, played for the Buckeyes and lettered in 1975, when the Buckeyes posted an 11-1 record and made a still unequalled fourth-consecutive Rose Bowl appearance … parents are Mike and Sue Datish … high school coach – Dick Angle … born Aug. 1, 1983.