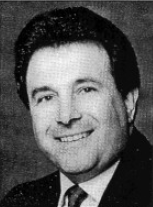 1997 Media Guide: Bill Conley begins his seventh year as a member of John Cooper’s coaching staff in a new capacity. The Buckeyes’ defensive ends coach the past five years, Conley shifts to offense this year and will work with the tight ends.

In addition to the latter, Conley will continue to head up the Buckeyes’ recruiting efforts. In recent years, Conley’s efforts have helped the Buckeyes land some of the top high school players in the nation. The 1996 freshman class was ranked No. 1 in the nation and included two future NFL first round draft picks: David Boston and Andy Katzenmoyer.

1996 Media Guide: Bill Conley is in his sixth year as a member of John Cooper’s coaching staff. In addition to coaching the defensive ends, he also oversees the Buckeyes’ recruiting efforts. This past year. thanks in large part to his efforts, the Buckeyes landed one of the top recruiting classes in college football.

Conley is in his second tour of duty with the Buckeyes. He coached OSU’s linebackers between 1984 and 1987, helping to develop a number of outstanding players including All-Americans Chris Spielman and Pepper Johnson. Last year, end Mike Vrabel won first-team All-America honors and was the Big Ten Defensive Lineman of the Year.

1993 Media Guide: Bill Conley is in his third year on John Cooper’s staff. Named recruiting coordinator in 1991, he held that position for one year before switching to the defensive coaching staff in 1992.

1992 Media Guide: Bill Conley is in his second year as a member of John Cooper’s staff. After serving as recruiting coordinator during the 1991 season, he returns to the field this year as coach of the inside linebackers.

1991 Media Guide: Bill Conley, the newest member of John Cooper’s staff, is no stranger to Ohio State football. Named in April as the Buckeyes’ new recruiting coordinator, Conley played football for the Buckeyes in the early 1970s and was an assistant coach at his alma mater between 1984 and 1987.

Prior to coming to Ohio State, Conley spent the past three years as head football coach at nearby Dublin High School. He also has been the head coach at London, Groveport and Middletown high schools, all in Ohio, and has an excellent relationship with the high school coaches throughout the state.

Conley, 40, is a native of Columbus. He enrolled at Ohio State in the fall of 1968 and made the football team as a walk-on, lettering his last two years as a reserve offensive lineman.

Following graduation in 1972, Conley began his coaching career as an assistant coach at London High School. Elevated to head coach in 1974, he piloted London to a four-year record of 30-8-2.

In 1984, Conley left Middletown to become linebacker coach at Ohio State. During his four years with the Buckeyes, he helped develop a number of outstanding players, including two-time All-American Chris Spielman.