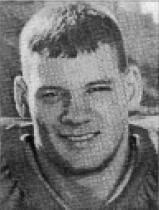 Post-OSU Update: Andy Katzenmoyer left OSU after his junior season and was selected in the 1999 NFL Draft by the New England Patriots (1st round, 28th overall). Katzenmoyer started 11 games as a rookie, making 79 tackles and 3.5 sacks. He did suffer a neck injury in 1999 and it hampered him in 2000. He had surgery prior to the 2001 season, but never played again. After his football days, Katzenmoyer opened a gym and went into insurance. He is also the president of the NFL Alumni of Central Ohio. (Update: Feb. 2022)

1998 Media Guide: Will be a candidate for all the major awards this year, including the Heisman Trophy … one of the premier players in college football at any position … won the Butkus Award last year as the nation’s top college linebacker and was a finalist for the Lombardi Award, the Nagurski Award as the nation’s Defensive Player of the Year, and the Maxwell Award … also named a consensus All-American, becoming the first Ohio State sophomore linebacker to win first-team honors … dominant player who can change the tone of a game with one play … defensive coordinator Fred Pagac calls Andy a “great player who has no physical weaknesses …has a great knowledge of the game and we expect him to lead vocally” … his speed – at his size – and ability to close on the ball carrier separate him from the rest of the pack … one of the best linebackers ever to play at Ohio State, joining the great tradition that features the likes of Ike Kelley, Randy Gradishar, Tom Cousineau, Pepper Johnson and Chris Spielman …already among OSU defensive record-holders in nine categories … not at all uncommon for opponents to build their game plan around neutralizing his effectiveness.

1997: Second on the team with 97 tackles, including 13 for losses totaling 30 yards, during major award-winning, consensus All-America campaign … his bone-jarring hit of Missouri quarterback Corby Jones made everyone’s highlight film and effectively changed momentum of that game … opened Iowa game by stopping Tavian Banks twice for losses on the Hawkeyes’ first three plays … clinched the Arizona win when he returned an interception 20 yards for his second collegiate touchdown and tying the school record for career interception return touchdowns (two) … had 11 tackles against both Arizona and Iowa to equal his career high … was rarely off the field, playing a total of 300 minutes … repeated as first-team all-Big Ten.

1997 Media Guide: As good as advertised, maybe better! … will be a candidate for first-team All-America honors and the Butkus Award this year even though he is just a true sophomore … a physical player with a nose for the ball and a penchant for making big plays … coming off a brilliant freshman campaign in which he started all 12 games and finished the season with 85 tackles, winning second-team All-America honors on the Associated Press team and consensus recognition as the Big Ten Freshman of the Year … also named Freshman All-America of the Year by the Football News … his emergence last year allowed Greg Bellisari to move back outside and clearly strengthened the overall defense.

1996: Paced the team in tackles for loss (23) and sacks (12) – both school records for a linebacker … other stats in a superb rookie season included four interceptions, six passes broken up and three fumbles caused … tied a school record with five tackles for loss (three of which were sacks) in the Rose Bowl … also had an interception in the Rose Bowl … scored his first collegiate TD against Minnesota, returning an interception 42 yards to pay dirt … had a key interception at Iowa and blunted the Hawkeyes momentum late in the third quarter by thwarting a two-point conversion attempt … his strip of the ball at Indiana was recovered in the air by teammate Matt Finkes and returned 45 yards for the go-ahead touchdown, clinching a Rose Bowl berth for the Buckeyes … named Big Ten Player of the Week following the Purdue game … led the team in tackles six times in ‘96, with a high of 11 against Michigan … led the defense in playing time with 297 minutes … won a starting spot the week before the season opener and was a regular the rest of the way, becoming the first freshman linebacker ever to start the first game at OSU.

High School: Made 114 tackles, 16 for loss and had eight sacks as a senior at Westerville South High School despite being double and triple teamed on a regular basis … Totaled 267 tackles, 10 sacks, 46 tackles for loss, 11 caused fumbles and two interceptions for his career … Also rushed for 214 yards and three TDs as a senior and 85 yards and nine TDs as a junior … One of two consensus All-Americans signed this year (offensive lineman Jefferson Kelley the other), garnering honors from Tom Lemming, Bluechip Illustrated, SuperPrep, Parade, USA Today, G & W and The National Recruiting Advisor … USA Today Defensive Player of the Year … Mr. Football in Ohio (first defensive player ever to be selected Mr. Football in Ohio) … Associated Press first-team all-Ohio defense (Division I) and AP Division I Defensive Player of the Year … Was chosen the national defensive player of the year by the Columbus Touchdown Club and the Atlanta Touchdown Club … Two-time All-State selection and three-time first team all-league … Rated the top linebacker in the country by Bluechip Illustrated … Parade’s top linebacker … Named the Best of the Midwest by the Detroit Free Press … Rated the second best strong side linebacker in the country by The National Recruiting Advisor … Rated the second best player in the Midwest by the Prep Football Report … Rated the eighth best linebacker in the country by SuperPrep … Rated the top player in Ohio by The Ohio Football Recruiting News … helped lead South to a league title and team was ranked 14th in the country for 11 weeks by USA Today as a senior … junior year team finished second in the state … Lettered three times in football and once in baseball, earning second-team all-district and all-league honors in baseball as a sophomore … Also lettered in track … High school coach is Rocky Pentello.

Personal: Chose Ohio State because “it’s the best” … Has two sisters … mother, along with numerous relatives, attended OSU … his father played football at Iowa State … is wearing the fabled jersey No. 45, made famous by OSU’s all-time great Archie Griffin … Plans to major in Business … Full name is Andrew Warren Katzenmoyer.