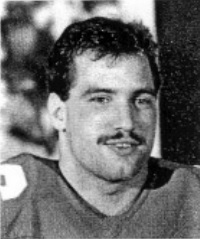 1987 Media Guide: A consensus first team All-America selection in 1986 … named to this honor by Associated Press, Kodak (coaches), Football Writers Association, Sporting News and by Football News … called “the most intense player I have ever seen,” by Ohio State Coach Earle Bruce … has a rare quality of being able to make a great play in a critical situation … had six pass interceptions last year, an unusually high total for an inside linebacker … made 205 tackles in 1986, including 105 solo stops … had nine tackles for a loss in each of the past two seasons … his three-year total of 390 tackles is third on Ohio State’s all-time list behind Marcus Marek with 572 and Tom Cousineau with 569 … Chris is quick, strong, totally dedicated and superbly conditioned … during the off-season, Chris works out on the weights four days a week – on Mondays and Thursdays his workouts are to strengthen his chest, back, triceps and neck, while on Tuesdays and Fridays he concentrates on the legs, shoulders and biceps … on the other three days he runs, rides and exercise bike and does special agility drills … Chris pestered his father about letting him begin formal weight training workouts when he was in elementary school but his father, a former coach and now a school administrator, refused on the grounds he was too young … Chris did begin modest workouts in the eighth grade …

1986: His 29 tackles against Michigan tied a school record set by Tom Cousineau … Spielman’s key pass interception and nifty 24-yard touchdown return broke open the 1987 Cotton Bowl Game and gave the Buckeyes a needed boost … a second Spielman interception in the Cotton Bowl spelled defeat for Texas A&M … named Top Defensive Player in the Cotton Bowl; Most Valuable Player in the Kickoff Classic and finalist for the Lombardi and Butkus awards.

1984: Two sprained ankles restricted his playing time as a freshman, but in the seven games he did play, it was apparent he was something special … Spielman made his collegiate debut in the second half of the 1984 opener with Oregon State … the Buckeyes trailed 14-3 and badly needed a spark – Spielman was exactly what was needed, making ten tackles, including several key stops in critical situations and caused a fumble with a solid hit … Spielman was named “Defensive Player of the Game” against Oregon State even though he played only 9.5 minutes.

High School: Parade called him “The Top High School Linebacker in the Nation” and Armour-Dial named him “Male High School Athlete of the Year” … Street and Smith chose him one of the “Top 15 High School Players in the Nation” … an honor student throughout high school, he had a 3.8 average.

Personal: A physical education major, he wants to coach after graduation.