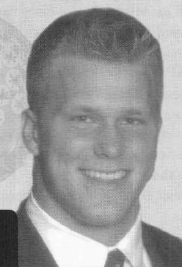 2004 Media Guide: Versatile athlete who can help at fullback or tight end on offense or at linebacker on defense … currently listed at fullback on the depth chart, but that could change in a second depending on the needs of the team … earned his first letter last year, appearing in 12 of OSU’s 13 games (all but San Diego State) … has added 15 pounds since enrolling at Ohio State and has greatly increased his strength … good blocker who has played the “H” back position in short-yardage situations … has the hands and speed to be a tight end and the power and determination necessary to be an effective fullback … was recruited primarily as a linebacker in the class that included A.J. Hawk, Bobby Carpenter and Mike D’Andrea, probably the four best linebackers ever to enter Ohio State in the same class.

2003: Saw most of his action with the special teams, but did play some “H” back … logged seven minutes against Michigan State and five against Indiana.

2003 Media Guide: Stan White could become the Buckeyes next two-way player … recruited as a linebacker, but was moved to tight end last fall … played both positions in the spring and is expected to continue in that role during the upcoming season … is a good athlete and an intelligent player … was redshirted last year, but will definitely see action this year … has good speed and will be a fine special teams player … his father, Stan White Sr., played linebacker for the Buckeyes and was a first-team All-Big Ten pick in 1971 … the elder White also wore No. 89 as a Buckeye.

2002: Switched from linebacker to tight end in the fall … redshirted and did not see any game action.

2002 Media Guide: Considered one of the best outside linebackers in the country … named to PrepStar’s Dream Team … 153 tackles, 17 tackles-for-loss, 14 pass break-ups, five sacks and three interceptions as a senior … selected as the Baltimore Sun’s Defensive Player of the Year … had 21 tackles to help Gilman clinch a fourth-consecutive league title … had 17 tackles against nationally-ranked Brooklyn Poly Prep … rated as the nation’s 18th best outside linebacker by Rivals.com … high school coach – Francis Poggi.

Personal: His mother and father both graduated from Ohio State and his father, Stan Sr., played football for the Buckeyes, winning All-Big Ten honors in 1971 before going on to a distinguished career in the NFL … parents are Stan and Patty White … his sister, Amanda, graduated from Stanford and currently competes as a tri-athlete … born Dec. 30, 1983.