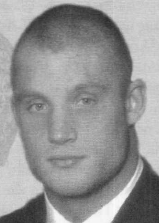 2004 Media Guide: Mike D’Andrea is the prototype linebacker with size, speed and strength … heads into fall camp as a candidate to start at middle linebacker, but will see extensive action regardless … a key component of what many analysts consider the best linebacker corps in the Big Ten … ranks sixth on the team in tackles among returning players.

2003 Season: Was an integral part of the linebacker rotation through the first ten games of the season before suffering a separated shoulder against Michigan State and was lost for the remaining three games … totaled 24 tackles, 14 of which were solos … had three tackles behind the line of scrimmage and forced a fumble, that coming on the first play of the fourth quarter vs. San Diego State, setting up a Mike Nugent field goal … saw a season-high 11 minutes of field time vs. San Diego State and played 10 minutes in four other games … had four tackles against Bowling Green, Wisconsin and Iowa … two of his tackles vs. the Hawkeyes were for loss.

2003 Media Guide: Mike D’Andrea is a highly regarded linebacker prospect … expected to battle Fred Pagac for playing time in the middle as the replacement for All-America Matt Wilhelm … prototype linebacker with size, speed and strength … coaches love his attitude and intensity … one of the Buckeyes’ most ferocious hitters … did spend some time at defensive end in the spring and was impressive there … played in 12 games last year, seeing time both at linebacker and as a member of the special teams … considered one of the top high school linebackers in the country … should be something special as he develops and gets the opportunity to play on a more regular basis.

2002 Season: Worked his way up the depth chart and by season’s end was the backup to Wilhelm … played in 12 games … recorded seven tackles, including four solo tackles … had a season-high three tackles against San Jose State … also forced a fumble in the game that ended a Spartan drive at the OSU 24-yard line just before halftime.

High School: Parade Magazine All-American and rated by Parade as the best prep linebacker in the country … also a first-team USA Today All-America selection … first-team Division II Associated Press All-Ohio selection … SuperPrep rated him as the No. 1 overall linebacker in the country … prototype linebacker with size, speed, and strength … renowned for his hitting and tackling as well as his competitive attitude … recorded 140 tackles as a senior and also averaged 15 yards-per-catch as a tight end … led his high school to a 9-1 record … had 15 tackles, including five tackles-for-loss and an interception, in a regional semifinals victory … also a national caliber shot and discus competitor and hopes to continue his track career at Ohio State … parents are Bob and Sue D’Andrea … high school coach – Dave Dlugosz … born Feb. 7, 1984.