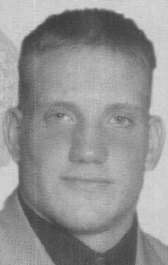 2004 Media Guide: The defensive MVP of the 2003 Tostitos Fiesta Bowl and one of the top linebackers in college football … tops the depth chart at the Will (weak side) linebacker spot in 2004, his second season as a starter … coming off a monster year in which he led the Buckeyes in tackles with 106 … also was second in solo tackles behind Dustin Fox (55) with 52 … blessed with size, speed and instinct … runs to the ball well and is a punishing tackler … won first-team All-Big Ten honors last year and should be a Butkus Award candidate this year … has already been named to the 2004 watch list for the Lombardi Award.

2003 Season: Finished the 2003 campaign with 13 TFLs (second on the team to Will Smith’s 20) and four sacks … also had a pair of interceptions and five passes broken up … had a career-high 13 tackles against Northwestern and was in double figures on three other occasions, including the Fiesta Bowl, where he had 10 stops … led the team in tackles seven times … had a 55-yard interception return against North Carolina State and also had a pick against Bowling Green … an OSU Scholar-Athlete … more than tripled his playing time with 333 minutes as a sophomore (100 as a frosh) … tied for second-most returning minutes on the defensive side with Nate Salley (Dustin Fox is the defensive leader with 365 in 2003).

2003 Media Guide: A.J. Hawk is one of the young lions on defense … expected to take over for graduated Cie Grant at the “will” linebacker spot … played his way into the two-deep last year as a true freshman and demonstrated a penchant for making big plays … is tough, smart and aggressive … coming off a solid spring … was the leading tackler in the spring game with 14 total stops, 13 of which were solos … makes good things happen when he is on the field … has made tremendous progress in a short period of time and has the potential to be a special player if he continues to work hard and is able to remain healthy.

2002 Season: Was the backup to Cie Grant at the weak-side linebacker spot … recorded 26 tackles as a true freshman, 13 solo and 13 assisted … had 3.5 tackles-for-loss including a half-sack against Washington State … had two interceptions, including one he returned 34 yards for a score against Kent State … had five tackles and made his first career start against Penn State … intercepted Penn State’s Zach Mills on the Nittany Lions firsts possession and returned it 10 yards … also had five tackles against Kent State and Wisconsin … came off the bench at Wisconsin and played the entire second half in place of the injured Grant.

2002 Media Guide: Missed much of his senior year because of injury, but still finished the campaign with 82 tackles … a much more accurate reflection of his ability can be found in his 583 career tackles (142 as a freshman, 192 as a sophomore and 169 as a junior) … always around the ball and has demonstrated a penchant for making plays … played the middle in high school, but clearly has the ability to move to an outside position with the Buckeyes … rated as the nation’s 30th best outside linebacker by Rivals.com … also averaged over 40 yards as a punter his senior year … high school coach – Ron Ullery.

Personal: Is the son of Keith and Judy Hawk … has two older brothers, Matt and Ryan … Ryan is a senior quarterback at Ohio University … enjoys hunting and target shooting … practices yoga, which he lists as one of the biggest risks he has taken … best football memory to date is winning the 2002 National Title … top memory from 2003 is the repeat victory at the Fiesta Bowl … the pregame OSU Marching Band “Skull Session” is his favorite home game experience … The Tunnel of Pride is top OSU tradition … if he were not playing football, the baseball Buckeyes would be his alternate OSU sport of choice … born Jan. 6, 1984.