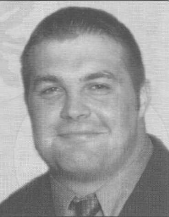 2004 Media Guide: Enrolled at Ohio State in April of 2003 and took part in spring drills the last two years … sat out the 2003 season and is eligible for game competition in 2004 … recorded six tackles in the 2004 Ohio State Spring Game for the Gray Squad … finds his name atop the list of middle linebackers on the depth chart heading into fall camp.

2003: Worked out with the scout team defense at Ohio State while satisfying NCAA transfer rules.

2003 Media Guide: Anthony Schlegel enrolled at Ohio State in April and took part in spring drills … a transfer from the Air Force Academy, where he lettered the past two years … will have to sit out the 2003 season and will become eligible for game competition in 2004.

2002: Started all 13 games and became the first sophomore in school history to win first-team All-Mountain West Conference recognition … wound up the year with 118 tackles (54 solos, 64 assisted) … first Falcon since 1997 to top the 100 mark … finished third in the Mountain West in tackles … led the team in tackles-for-loss with 10 … was named MVP of the Diamond Walnut San Francisco Bowl … had a career-high 19 tackles against Notre Dame.

Personal: Parents are Roger and Connie Schlegel … set two world deadlift records in the 19-and-under division with lifts of 662 and 672 pounds.