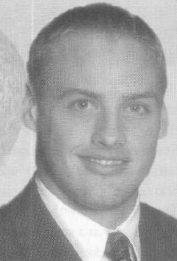 2004 Media Guide: Talented young signal caller who is expected – along with Troy Smith – to compete for the starting quarterback position in the fall … has a lightning quick release and is very accurate … a classic pocket passer blessed with great instincts and a feel for the game … throws a soft, easy to catch, ball … appeared in four games last year and completed four of eight passes for 24 yards (no touchdowns or interceptions).

2003: Watched and waited for his turn behind starter Craig Krenzel and backup Scott McMullen … made his collegiate debut in the season opener against Washington … also saw action against Bowling Green, Northwestern and Indiana … was three-of-seven for 20 yards with a drop in six minutes of playing time in the Northwestern game … had a 13-yard completion to Bam Childress against the Wildcats, his longest career completion.

2003 Media Guide: Justin Zwick is probably the most highly-regarded quarterback to enroll at Ohio State in more than four decades (only Rex Kern in 1967 and Art Schlichter in 1978 were as well publicized) … was a high school phenom in northeastern Ohio, first at Orrville and then at Massillon, throwing for a combined total of 10,500 yards and 112 touchdowns at those two schools … redshirted last year, but enters the fall as one of three talented backups to incumbent Craig Krenzel … has a deft throwing touch and unbelievably quick release to go along with great instincts and a natural feel for the position … lit up the scoreboard in the spring game by completing 17 of 29 passes for 217 yards and four touchdowns, leading his Scarlet team to a 37-29 victory … all four of his TD passes came in the second half in a wild-and-wooly shootout in front of more than 57,000 fans … prefers to stay in the pocket, but can scramble if need be … intelligent player.

2002: Redshirted and did not see any playing time.

High School: First-team all-state and the Division I Associated Press co-Offensive Player of the Year as a senior …Parade All-American … unquestionably the most publicized high school
quarterback to sign with the Buckeyes in recent years … threw for 10,500 yards and 112 touchdowns during his high school career, completing 737 of 1,368 (.540) passes during four years as a starter … led Massillon to a 12-2 record as a senior, throwing for 3,821 yards and 40 touchdowns … played his first two years at Orrville, throwing for 4,759 of his yards and 49 of his TDs as a freshman and sophomore … led Orrville to the state title as a freshman … ranked as the nation’s third best pro-style quarterback by Rivals.com… high school coach – Rick Shepas.

Personal: Is the son of Bill and Linda Zwick … his father played football and baseball at Eastern Kentucky … his older brother, Jared, played for Coach Jim Tressel at Youngstown State … admires Colts quarterback Peyton Manning because of his work ethic and dedication … born May 12, 1983.