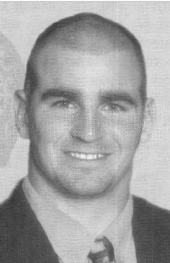 2003 Media Guide: Joel Penton is one of several promising young defensive lineman who are being counted on to work their way into the rotation this year and bolster an already strong area of the OSU defense … has good size and quickness and the coaches believe he has the potential to be an outstanding pass rusher … was redshirted last season, but impressed the coaches with his determination and fire … will compete with fellow redshirt frosh Jay Richardson for playing time as a backup to Simon Fraser.

High School: A first-team all-Ohio selection and the co-Division III Defensive Player of the Year as a senior, sharing that honor with another Ohio State recruit, defensive end Mike Kudla … also named as the recipient of the 2001 Art Teynor Award, presented annually by the Ohio High School Coaches Association to its selection as player of the year … finished his senior year with 119 tackles, including 11 tackles-for-loss and eight sacks … had 11 sacks and 138 tackles as a junior and won Associated Press all-state recognition … has excellent athletic skills and is still growing … a member of the National Honor Society .. high school coach – Jeff Hood.

Personal: Is the son of Joel and Peggy Penton … involved in the Athletes-In-Action and Campus Crusade and is a frequent speaker on behalf of those groups … admires Reggie White because of his combination of athletic ability and strong faith … has three older sisters (the oldest graduated from Bowling Green, the middle one graduated from the Naval Academy and was just recently discharged from service, the youngest currently attends Miami of Ohio) … born June 26, 1983.