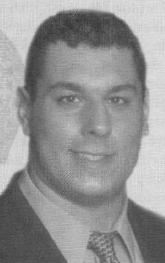 2004 Media Guide: Expected to be the starter at defensive tackle, replacing ironman Tim Anderson on the right side … was a key reserve last year, appearing in all 13 games and making one start … logged a total of 106 minutes in 2003, appearing at both tackle and end … is a physical player, very much in the stead of Anderson … wound up the 2003 campaign with a very respectable 17 tackles … coming off a very productive spring … expected to carry on the tradition of quality defensive line play after the departure of three NFL draftees a year ago … relentless player who is driven to succeed.

2003 Season: Recorded lone start vs. Northwestern at defensive end … season-high for minutes played was 16 in the home win over Iowa … also played double-digit minutes against San Diego State (11), Northwestern (12), Wisconsin (11) and Indiana (13) … led all non-starters with five tackles-for-loss (16 yards), and three sacks (10 yards) … top game was a six-tackle effort against Iowa, including 2.5 TFLs and a sack … added depth to the defensive line, allowing the coaches to rotate players in and out without losing any quality.

2003 Media Guide: Quinn Pitcock is expected to be the backup to veteran Tim Anderson at defensive tackle … highly thought of young player whose style of play is similar to Anderson’s all-out approach … will lend quality depth to an already deep position … was redshirted last year, but demonstrated early on that he was ready to play should the coaches choose to use him … has added 15 pounds since coming to Ohio State and has greatly increased his strength (bench press 395, squat 615) … is the heir apparent to Anderson in 2004 assuming he stays healthy and continues to improve … is a talented reserve with a bright future.

High School: A first-team Division II Associated Press All-Ohio selection as a senior … a second-team All-America pick by USA Today … the top defensive tackle in the state of Ohio and one of the country’s best … rated as the top defensive lineman in the Midwest by Super Prep Magazine … Rivals.com lists him as the nation’s fifth best defensive tackle and the 11th best defensive lineman overall … led Piqua to a 12-3 record and a berth in the state playoffs last season … finished the year with 69 tackles, including 15 sacks … simply overpowered opposing offensive linemen … from the same high school as former Buckeye defensive end Matt Finkes, who helped lead the Buckeyes to the 1996 Big Ten co-championship and a berth and victory in the 1997 Rose Bowl … high school coach – Bill Nees.

Personal: Is the son of Michael and Janey Pitcock … hobbies include riding dirt bikes and motorcycles … enjoys all sports … his grandfather, Phil Edwards, played football at Miami (Ohio) … math and science are two of his favorite subjects, which is why he hopes to pursue a degree in engineering … born Sept. 14, 1983.