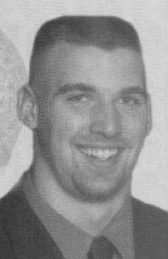 2004 Media Guide: Solid young defender who played behind All-America Will Smith last year … has played in all 27 games (159 total minutes) the past two years … sees himself ahead of the class at the right defensive end spot entering fall camp.

2003 Season: Finished the 2003 regular season with nine tackles, including a sack against Northwestern … also had a fumble recovery in the end zone against Purdue that was Ohio State’s lone touchdown of the day in a 16-13 overtime win over the Boilers … three tackles against Northwestern was his top statistical game … earned OSU Scholar-Athlete recognition.

2003 Media Guide: Mike Kudla worked his way into the defensive line rotation last year as a true freshman behind Darrion Scott at end … played in all 14 games and finished his rookie campaign with 12 tackles … heads into the fall as the probably backup to senior Will Smith at the drop end position … came down with a viral infection shortly after the Fiesta Bowl and alarmingly lost 40 pounds in a short period of time … was able to make a full recovery, but still missed some spring practice after injuring his shoulder during winter conditioning … should be set to go in the fall … tough, hard-nosed player with a great work ethic and an instinctual understanding of the game … should see a lot of playing time … despite his weight loss in January, he is actually up 20 pounds from this time a year ago.

2002 Season: Played a total of 56 minutes and earned his first letter … played a season-high 15 minutes against San Jose State after playing 13 minutes at Northwestern … had a tackle-for-loss in the Kent State game, throwing down Charles Newton for a 2-yard loss … had a season-high four tackles against Kent State … recovered a fumble against San Jose State in the second quarter and returned it 17 yards to set up an OSU touchdown.

High School: Played linebacker, and played it well in high school, but is being projected as a defensive end for the Buckeyes … was selected as the Division III Associated Press co-Defensive Player of the Year as a senior … also a first-team All-Ohio pick by the AP … coming off an amazing senior year in which he recorded 210 tackles, including 27 tackles-for-loss and six sacks … also had an interception … finished his career with 495 total tackles, including 170 as a junior and 115 as a sophomore… rated by Rivals.com as the nation’s 18th best defensive end prospect … high school coach – John Hopkins.

Personal: Parents are Paul and Mary Fran Kudla … has two brothers, Brian and Eric and two sisters, Katie and Emily … Tempe, AZ, twice, has been the most interesting place he has visited to date … Jamaica is a place he would like to experience … hobbies including farming, lifting weights and woodworking … Ohio State’s 2002 National Championship is his favorite football memory … scoring a touchdown in 2003 is his top memory from a year ago … The Ohio State Marching Band is his favorite tradition at OSU … born March 8, 1984.