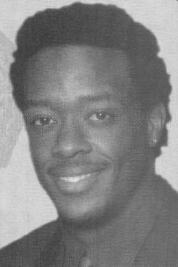 2004 Media Guide: Served as a backup to Ohio State’s vaunted 2003 defensive front at the defensive end position … improved strength, speed and size as a redshirt freshman in 2002 … returned to the field a year ago … played in five games … in two spring games as a Buckeye, Richardson has 7.5 tackles, which includes a sack and three tackles-for-loss … demonstrated big-play potential and should get an opportunity to demonstrate those abilities on Saturdays this fall … fans will see him primarily at the left defensive end position in 2004 along with senior Simon Fraser.

2003: Played a career-high five minutes in the season opener vs. Washington, which he lists as his favorite memory of his freshman campaign … also saw action vs. Bowling Green, Indiana, Penn State and Michigan State.

2003 Media Guide: Jay Richardson is another of the young lions on the Buckeyes’ defensive line … should be an excellent pass rusher with his combination of size and speed … played well in the spring and demonstrated big-play capability … four tackles in the spring game included a 12-yard sack … has the frame to put on additional weight without hurting his mobility … finished the year on a strong note and has the coaches excited about his potential … was a one-man wrecking crew in high school and was very highly sought after.

2002 Media Guide: Coming off a superb senior year in which he won first-team Division I all-state honors from the Associated Press … more than justified that selection, and any other honors he
might have received, by recording 73 tackles, including a whopping 43 tackles-for-loss … helped lead Scioto to a 10-2 record in 2001 … also plays tight end on offense … had a fine junior campaign, recording 75 tackles and 17 tackles-for loss before exploding onto the scene as a senior … ranked by Rivals.com as the nation’s 32nd best defensive end prospect … also plays basketball … high school coach – Karl Johnson.

Personal: Parents are Glen and Deborah Johnson … his mother played women’s rugby at Ohio State and his father played college football at Tiffin … admires all-pro receiver Jerry Rice because of his work ethic, and patterns himself after all-pro defender Simeon Rice … enjoys drawing, mostly pencil sketching (took first place at middle school and high school art shows with his renderings) points to the pre-game walk from the team hotel to Ohio Stadium as his favorite tradition at Ohio State … believes his best asset is his speed, which he would use to play soccer at Ohio State if he did not play football … born Jan. 27, 1984.