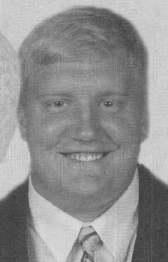 2004 Media Guide: Reserve lineman who has seen extensive action the past two years and is highly regarded because of his versatility … employed primarily as a backup tackle during the 2002 and 2003 seasons (behind Shane Olivea) and recorded most of his playing time in short-yardage and goal-line situations when the Buckeyes used an extra lineman … was moved to guard last spring, however, and is expected to be the starter on the right side in 2004 … is a hard worker and a great competitor.

2003 Season: Converted to scholarship in the fall … played in 10 games … was hampered late in the season with an ankle sprain that kept him out of the Michigan State, Michigan and Kansas State games … the Northwestern game was his first start as a Buckeye.

2003 Media Guide: Mike Kne is a solid reserve at tackle behind Shane Olivea on the right side … played an important role for the offense last year as the extra tackle when the Buckeyes went to their “jumbo” look … has size and speed and seems to respond well to pressure … originally enrolled at Fordham and was a starter there as a freshman (he led the team in number of plays) … transferred to Ohio State in 2001 because he dreamed of someday playing in the Rose Bowl, but is more than happy that his first bowl appearance was in the Fiesta Bowl … made the team as a walk-on and sat out the 2001 season … was pressed into action last year because of a lack of depth and played surprisingly well.

2002 Season: Earned his first letter … appeared in 11 games for a total of 36 minutes … 10 minutes against San Jose State was his longest stint.

2001 Season: Sat out in accordance with NCAA rules, but was permitted to practice.

2000 Season: Enrolled at Fordham and was a starter.

High School: Played defense for three years before switching to offensive tackle as a senior … helped lead St. Ignatius to the Division I state title as a senior.

Personal: Parents are Tom and Joan Kne … an older brother, Tom, played football at Baldwin Wallace and earned honorable mention All-America recognition … enjoys walleye fishing and playing golf as ways of relaxing … favorite childhood memory is going on vacation with his family to Lake Erie … enjoys history and art and would like to someday visit Paris … career goal is to become a middle school teacher.