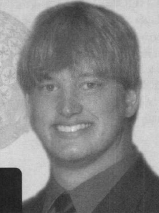 2004 Media Guide: Listed on the preseason watch list for the Rimington Award as the top center in college football … unquestionably the Buckeyes’ best offensive lineman … will be a candidate for All-Big Ten and All-America honors this year … compares favorably to former Buckeye All-American and 2001 Rimington Award winner LeCharles Bentley in terms of strength, balance and sheer power at the point of attack … and like Bentley, is extremely competitive and mentally tough … an intelligent player and student of the game, he makes all the calls up front … can run and is very effective when asked to pull and lead the play … made giant strides last year and has really matured from a physical standpoint … can also play guard and because of his power and ability to pull – coupled with the Buckeyes’ penchant for the power game – that could be a possibility at times this year … a 21-game veteran who played in all 13 games last year and started the final 10 (his first start was Bowling Green in week 4).

2003 Season: Everyone knew he was going to play, the only question was when and where? … the answer came against North Carolina State when starting center Alex Stepanovich suffered a high ankle sprain on the last play of the first half … enter Mangold, who started the second half and the final 10 games of the season … played in all 13 games and totaled 342 minutes – the sixth highest figure on the team.

2003 Media Guide: Nick Mangold is a highly thought of young player who is ticketed for extended playing time this year on the heels of an impressive freshman campaign … heads into the fall at No. 2 on the depth chart behind Alex Stepanovich at center … may be too good to keep out of the lineup if he continues to improve … will certainly add to the depth and versatility of what is shaping up to be a deep and talented offensive line … is a physical player with a great attitude … has a bright future and will be a permanent fixture up front after Stepanovich departs.

2002 Season: Was one of two true freshman to see extensive action along the offensive line … was impressive from the beginning of fall camp and quickly established himself as the backup behind Stepanovich … made his collegiate debut in the second game of the season against Kent State … worked hard throughout the course of the season and has impressed the coaching staff with his quick grasp of the offense … played significant minutes down the stretch when the game was on the line, including the Purdue, Illinois, Michigan and Miami games … his emergence allowed Stepanovich to also play guard.

High School: Was a first-team Division III all-state selection by the Associated Press … started on both sides of the ball since his sophomore season and earned a reputation for being able
to dominate the line of scrimmage no matter where he lines up … considered one of the top offensive linemen in the state of Ohio and rated by Rivals.com as the nation’s third best center prospect … selected to play in the All-American Bowl in San Antonio, Texas, following the regular season … also a standout student … high school coach – Ed Domsitz.

Personal: Is the son of Vern and Therese Mangold … has three sisters, Kelley, Holley and Maggie, all of whom are younger … calls learning how to ride a bike his favorite childhood memory, and New Zealand as the most interesting place he has ever visited (went there and Australia in 1993 with his father on a business trip) … relaxes by playing cards and watching television (favorite shows are: The Simpsons and Law & Order SVU) … an uncle, Doug Hamlin, swam for Ohio State in the early 1990s … born Jan. 13, 1984.