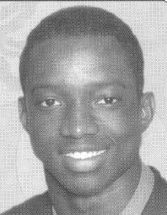 2004 Media Guide: Talented performer … saw action in all 13 games last season and started at Michigan … has the skills and athleticism to be a big-play contributor … was Chris Gamble’s understudy at the field (wide side) cornerback position last season and began 2004 spring practice as the starter there, but moved to the boundary (short side) cornerback position when returning starter Dustin Fox went down with a concussion … was the first cornerback selected by the seniors in the 2004 spring game draft … expected to return to the field corner spot in the fall to contend for the open starting position vacated by Gamble … also returns punts … enrolled early at the beginning of Winter Quarter in 2003 so he could take part in winter conditioning and spring practice … quickly worked his way on to the depth chart at cornerback and nailed down the No. 2 field corner spot behind Gamble.

2003: Played in all 13 games and started the regular season finale in front of an NCAA national attendance record of 112,118 at Michigan … had 14 tackles on the year, 13 of which were solo stops … had three tackles in the season opener against Washington and a career-high four stops in the win at Indiana … had three tackles in the overtime win vs. Purdue … made his first collegiate start at Michigan … saw action on many of the special units.

High School: Enrolled at the beginning of the winter academic quarter (Jan. 6) so he could take part in winter conditioning and spring practice … quickly worked his way onto the depth chart at cornerback … a native of Liberia … also lived in Philadelphia before moving to Houston … ranked as the 14th-best safety prospect in the nation by Rivals.com … had 60 tackles and three interceptions as a senior … averaged over 10 yards per punt return as a junior … made dramatic improvement between his junior and senior seasons and was recruited by a number of Big Ten schools in addition to schools in the Southwest … has all the tools to be an outstanding cover corner … long jumps 22 feet and finished second in the 100 and 200-meter runs at the district track meet as a junior … high school coach was Ray Kenjura.

Personal: Is the son of John and Jeannet Youboty … has one sister, Masanghai, and two brothers, Yousif and John … was born in Liberia and moved to Philadelphia when he was four years old … moved to Texas when he was in eighth grade … favorite pro sports team is the Philadelphia Eagles … favorite professional athlete is Barry Sanders … favorite football memory to date is leading his Klein H.S. team to a win over rival CyFalls H.S. when he blocked a field goal to send the game into overtime and then an extra point attempt in OT to win the game.