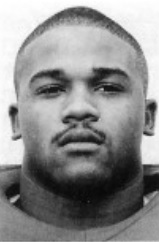 1989 Media Guide: Will back up Scottie Graham at fullback this year … has added ten pounds from a year ago in an effort to be a more effective blocker … has the speed to play tailback should the occasion arise … serious, hard-working player who is coming off a good spring.

1988: Played in seven games for a total of 32 minutes … started the Illinois game when injuries felled Carlos Snow and Marc Hicks … season totals were eight carries for 32 yards and five receptions for 36 yards … all five receptions came against Illinois.

1988 Media Guide: Has the speed and power to play either tailback or fullback, but prefers the former.

High School: Ran for 1,540 yards on 189 carries his senior year and scored 19 touchdowns … rushed for nearly 3,000 yards and scored 43 touchdowns during his career … won all-Ohio honors as a senior when he scored 19 TDs and led St. Clairsville to an 11-2 mark … also played linebacker … a sprinter on the track team.

Personal: His older brother, Tim, played tailback for the Buckeyes and is the second-leading rusher in Ohio State history … enjoys all music … admires Joe Morris of the Giants … favorite food is pizza.