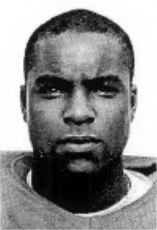 1989 Media Guide: Marc Hicks is an outstanding athlete whose brief career with the Buckeyes has been marred by injuries … lost considerable playing time last year due to a sprained ankle suffered in warmups before the LSU game … underwent surgery on his left wrist this past March and did not take part in spring practice … healthy, he has the skill and speed to help at running back or wide receiver … a big play athlete … transferred to OSU from Cal-Berkeley in the spring of 1987.

1988: Played in 10 games, but logged a total of just 69 minutes … began the year at split end, but moved to tailback after Vince Workman was declared ineligible … carried the ball 29 times for 131 yards … also had 14 receptions for 201 yards and one touchdown … averaged 19.4 yards per run back on 12 kickoff returns.

1988 Media Guide: Transferred to Ohio State from Cal-Berkeley in the Spring of 1987 … sat out last year in accordance with NCAA rules … did not practice last fall and only sparingly last spring in an attempt to successfully complete enough hours to be eligible in 1988.

Personal: An outstanding baseball player, he was drafted by the Minnesota Twins out of high school.