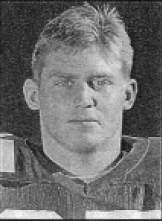 1997 Media Guide: A projected starter on the outside … has been a key reserve the past two years … was the starter in the 1995 season opener against Boston College, but suffered a stress
fracture the following week in practice and missed the next six games … recovered in time to play in the last five games, but never recaptured his starting position … one of the Buckeyes most experienced linebackers with 20 career games to his credit … intelligent, hardworking player.

1996: Played in all 12 games and had 13 tackles … career-high four tackles against Pittsburgh and Illinois were his top efforts … picked off his first career interception against Minnesota.

1996 Media Guide: One of the contenders to start at the boundary position … started the season opener against Boston College last year and played well in his first ever start, logging a solid 21 minutes of playing time and gaining valuable experience … but then suffered a stress fracture in his right foot the following Monday and missed the next six games … returned to action against Iowa on Oct. 28 and played six minutes against the Hawkeyes … was not able to reclaim his starting position, but did play in OSU’s last five games (Iowa to Michigan) … wound up the season with nine tackles, all solos … three tackles against Iowa and Illinois were his top games … intelligent football player who learns quickly … also a member of the special teams.

1995 Media Guide: Heads into the fall as the starter at the Buck (strong side) position, replacing Greg Bellisari who has moved inside … tough, smart, coachable football player, who has given signs of being a playmaker … needs to add weight and his lack of experience is a concern, but the OSU coaching staff likes his work ethic and attitude … got almost all the work at Buck last spring and really benefited from that attention … made dramatic improvement between the beginning and the end of spring ball.

High School: The Ohio Division II defensive player of the year and a two-time first team all-state selection (offense in 1992, defense in 1993) … earned honorable mention All-America honors from USA Today … recorded 144 tackles as a senior defensive buck with six sacks and 14 tackles for loss … as a quarterback, threw for over 1,300 yards and nine TDs and rushed for 143 yards and four scores … had 303 tackles, passed for 2,594 yards and 20 TDs and rushed for 480 yards and 12 TDs during his career … served as a two-year team captain … suffered a cracked fibula in Alter’s last game, but is expected to be 100 percent by fall practice … played basketball, and helped his team reach the state semi-finals in 1993.