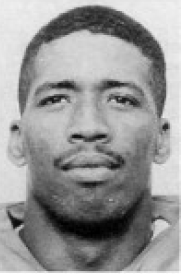 1990 Media Guide: One of the top receivers in college football … strong All-America candidate … coming off an excellent year in which he led Ohio State in receptions (32) and led the Big Ten in average yards per catch (19.0) … great hands and leaping ability … OSU’s big play receiver … also the Buckeyes’ No. 1 punt returner … carried the ball three times last year and averaged 14 yards a carry … re-aggravated a groin pull in the Hall of Fame Bowl and was held out of spring practice as a precautionary measure … has 59 career catches for 1,046 yards, an average of 17.7 yards per reception … 12th in career receiving at OSU … good blocker … 68-yard pass reception against Auburn in the Hall of Fame Bowl is an OSU bowl record.

1989: started all 12 games … began the year at split end, but was moved to flanker midway through the season in an effort to get him the ball more … caught the winning TD in a comeback victory at Minnesota … averaged 11.8 yards per punt return and had a 66-yard runback for a TD at Illinois … 100-yard games against Boston College, Minnesota and Auburn … top game was six catches at Minnesota.

1988: Played in 10 games and started the last eight … second on the squad in receptions with 27, good for 438 yards and two touchdowns … averaged 16.2 yards per catch, tops on the squad … did not catch a pass in the opener, but had at least one reception in each of OSU’s last 10 games … top game was against Wisconsin — six receptions for 121 yards and a TD.

HIGH SCHOOL: An all-state selection in both football and basketball, lettering three years in both sports … played wide receiver as a sophomore and junior, but was a quarterback as a senior … during his three years at Alter, his teams were 28-6… captain of the basketball team as a senior.

PERSONAL: Hobby is bowling and playing basketball … wants to go into sports broadcasting after his playing career is over.