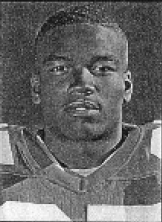 1998 Media Guide: A highly capable running back who has played in a supporting role his entire career, but always plays extremely well when called upon … an experienced tailback with 24 appearances who can make defenders miss him … his position coach, Tim Spencer, calls Jermon a “shifty and elusive runner”… he has more rushing attempts than any current member of the team and his seven rushing touchdowns are tied for the most among the Buckeyes …his 690 career rushing yards are topped only by Michael Wiley’s 764 rushing yards … has a take-note career average of 5.1 yards per attempt.

1997: Took a voluntary red-shirt season in order to try and swing more playing as a senior in 1998.

1997 Media Guide: Has been a top-flight reserve throughout his career and has always played well when called upon … is a slashing runner with breakaway speed and tremendous vision … is a hard worker and has a great attitude … has played in 24 games as a Buckeye and has a very respectable career average of 5.1 yards per carry.

1996: Backed up Pepe Pearson last year and was the Buckeyes’ third leading rusher with 319 yards on 51 attempts – an average of 6.3 yards per carry … top game was a career high 82 yards on 14 carries against Minnesota … had 63 yards, including a career-long 36-yard run, and a pair of touchdowns the following week at Illinois … also had a pair of receptions last year … played a total of 56 minutes in nine games last year

1996 Media Guide: Good young tailback who saw limited action in seven games last year … figures to see more playing time this year now that two-year starter Eddie George has departed … enters the season No. 2 on the depth chart behind Pepe Pearson … has excellent vision and cutting ability and is one of those runners who has a knack for finding the end zone … had 38 carries for 169 yards last season, including a 26-yard run (his career long) against Boston College in the season opener … 34 yards against BC and Indiana (he had a 24-yard run against the Hoosiers) and 29 at Pittsburgh were his top performances … season-high 10 carries against Pitt … has added 10 pounds since his freshman year, but has lost none of his quickness.

1995: was the No. 3 tailback behind Eddie George and Pearson.

1995 Media Guide: Good young tailback prospect … appeared in eight games last year as a true freshman, logging a total of 33 minutes … finished the year as the Buckeyes’ third leading rusher, netting 202 yards and three touchdowns on 45 carries … carried the ball 13 times and had 54 yards and all three of his TDs in eight very productive minutes against Houston … also had 11
carries for 34 yards against Purdue … great cutback runner and may have the best vision of any of the OSU backs … also had one reception on the year, a six-yard grab against Houston … played well in the spring and will be a contender for playing time this fall … has added 10 pounds since last year.

1994: played in eight games as a true freshman … had three touchdowns in eight minutes against Houston.

High School: The Ohio Division III offensive player of the year and a two-time first team all-state selection 2 … also earned All-America honors … rushed for 1,819 yards and 29 touchdowns as a senior, 1,454 as a junior and 1,018 as a sophomore … helped his team go 13-1 his senior year and reach the state title game before it lost by three points … squad posted an identical record his junior season and also reached the state championship game … rushed for 4,452 yards and scored 70 touchdowns, both school records during his career … high school coach was Bob Lutz … also played basketball (helped team reach state semifinals as a senior) and was a long jumper in track … was honorable mention academic all-league as a senior.

Personal: Hobbies include video games, reading and all sports … from the same high school that produced former OSU All-America lineman Ken Fritz … nickname in high school was “The Jet.”