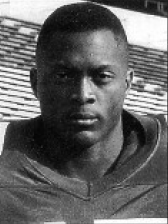 1995: Etched his name tn the Ohio State history books by becoming the fifth Buckeye player to win the coveted Heisman Trophy as the top player in college football … also won the Doak Walker Running Back Award, the Maxwell Award, the Chicago Tribune’s Silver Football as the Big Ten’s Most Valuable Player and the Walter Camp Player of the Year Award … rushed for a school-record 1,927 yards and scored 25 touchdowns (24 rushing and one receiving) … led the country in scoring with an average of 12.1 points a game and finished fifth Nationally in yards per game at 152.1 … also fourth nationally in all-purpose running at 185.42 … carried the ball 328 times, the second highest one-season total in OSU history behind Keith Byars’ 336 in 1984 … also set a school record for receptions by a running back with 47 … had 99 yards in limited action in the season opener against Boston College and then reeled off a string of 12 consecutive 100-yard games, including 219 against Washington, 210 against Notre Dame and a school-record 314 against Illinois, to close out the season … scored four touchdowns in the first half of the Iowa game and did not play in the second half … wound up second in career rushing yardage at Ohio State with 3,768 yards, almost all of that total coming his last two years … named to every All-America team.

1995 Media Guide: Senior running back who combines bruising power with breakaway speed … started for the first time last year and rushed for 1,442 yards and 12 touchdowns on 276 carries, an average of 5.2 yards per attempt … his 1994 rushing total was the fifth best single-season effort in OSU history and was the best showing by an OSU hack since Keith Byars ran for a school record 1,764 yards in 1984 … additionally, his 276 carries is second in OSU annals (behind Byars’ 336 in 1984) … had eight 100-yard games lust year, including 206 yards at Northwestern and 219 at Michigan State, making him the only back in Ohio State history ever to rush for 200 or more yards twice in the same season.

1994 Media Guide: An impressive athlete who has waited patiently for the opportunity to start at tailback … saw virtually all of the action during spring drills, and goes into fall camp as the player to beat for the starting nod … has all the skills necessary to become a standout because of his combination of speed and power … also has an outstanding attitude, and has one of the top work ethics on the team… has the ability to make tacklers miss him because of his good feet and deceiving quickness.

1993: Played in 11 of the 12 games (missed the Michigan game) as the no. 3 tailback and as a member of the specialty teams… ranked third on the team with 223 yards on 42 carries (4.2 average), and scored three touchdowns .. . top games were 96 yards on 11 carries and a one-yard TD run at Purdue, 42 yards on eight carries in the opener against Rice and had a pair of one-yard scoring runs at Pittsburgh … longest run was a 32-yarder at Purdue .. . gained 39 yards on 10 carries in the spring game.

1993 Media Guide: An impressive athlete who will push seniors Raymont Harris and Butler By ‘not’e for the starting tailback job … played both tailback and fullback last season but will likely be used solely at tailback this year … has a bright future at Ohio State because of his combination of speed and power … coaching staff also likes his attitude, especially his ability to learn from his mistakes … was the top rusher in the spring game with 52 yards on 12 attempts … saw limited action but appeared in all 11 regular season games last fall… missed the Florida Citrus Bowl with a bruised shoulder … carried the ball 37 times for 176 yards and scored five touchdowns … was primarily used in short yardage situations early in the season while Robert Smith was recovering from rib and ankle injuries … scored three TDs in the win at Syracuse on rushes of one, one and two yards, and rushed for a season-high 97 yards against Northwestern, including a 60-yard jaunt … also played on the specialty teams … running backs coach Frank Falks says George reminds him of former USC tailback Marcus Allen because of his ability to make tacklers miss him with his good feet and deceiving quickness.

1992 Media Guide: Enrolled at Ohio State last Spring Quarter after spending the past three years at Fork Union Military Academy in Virginia … graduated in 1991, but spent an extra year at the academy … participated in the Buckeyes’ spring drills and gained 80 yards on 14 carries and scored a touchdown during OSU’s spring game … rushed for 2,572 yards and 37 touchdowns his last two seasons at Fork Union, gaining 1,372 and scoring 15 times in 1991 … served as a captain … ran track at Fork Union, and was the state champ in the low and high hurdles in 1991 … attended Abington High School in Philadelphia before transferring after his sophomore season … football coach was Micky Sullivan … born 9-24-73.