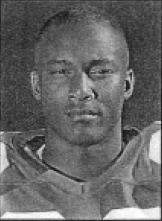 1997 Media Guide: Will be in his second year as the Buckeyes’ starting tailback … ran for 1,443 yards and 17 touchdowns last year … both totals led the team and his yardage figure ranks as the sixth best one-season figure in Ohio State history … finished third in the Big Ten and 11th nationally in rushing yards per game with an average of 124.82 (based on regular-season games only) … has been timed electronically at 4.4 in the forty-yard dash, the best time ever by an OSU back … also has the raw power to run inside … stronger “mentally and physically” than he was a year ago and much more confident.

1996: Carried the ball 299 times (24.9 per game) and averaged an even five yards per carry … his total number of carries is the third most in OSU history and included a career high of 37 at Indiana … rushed for 100 or more yards 10 times last year, including a season and career best 173 at Notre Dame, where he also scored two touchdowns … other top performances included 141 yards vs. Penn State, 165 at Illinois and 111 vs. Arizona State in the Rose Bowl … had a 76-yard run against the Illini and a 62-yard scamper against ASU, the latter coming when the Buckeyes were pinned down on their own three-yard line late in the fourth quarter … scored three touchdowns against both Rice and Pittsburgh … his 165 yards at Illinois put him over 1,000 — making him the 12th OSU back to top that figure … ranks 11th on the all-time Ohio State rushing list with 2,166 yards, but can leap frog into third place by equaling his output of last year … also OSU’s third leading receiver last year with 19 catches … earned second-team all-Big Ten honors last year and should be a candidate for even greater postseason laurels in 1996, including the Doak Walker Award as the nation’s top collegiate running back.

1996 Media Guide: Takes over for Heisman Trophy winner Eddie George at tailback … has big shoes to fill, but is a very talented runner and should maintain the high level of play that has been characteristic of OSU tailbacks in recent years … has added weight since last year and is a solid 206 pounds … combines that size with a dynamite start, breakaway speed and excellent vision … also a fine pass receiver … can run inside or out and gives the Buckeyes an element of speed that they have not had the past three seasons … has been George’s backup the past two years … carried the ball 83 times for 385 yards and three touchdowns last year … Was second to George in rushing and was the only other tailback besides George to score a touchdown … had an impressive four-game stretch between Iowa and Indiana in which he carried the ball 48 times for 277 yards and all three of his TDs … 79 yards on 14 carries against the Hoosiers was his top individual effort … longest run was 24 yards against Iowa … had five pass receptions for 95 yards, including a 44-yard catch-and-run against the Hawkeyes … had an excellent spring and really separated himself from the other tailback candidates … the type of player who will work diligently in the fall to maintain that edge.

1995 Media Guide: Finished last year as the No. 2 tailback behind Eddie George and was the Buckeyes’ second leading rusher with 338 yards on 85 carries … also had two touchdowns, one against Houston and the other vs. Purdue … slashing runner with breakaway speed … took over for the injured George (ankle sprain) late in the first quarter at Penn State and responded with 57
yards on nine carries … top game in terms of yardage was 65 yards against Houston … longest run of the year was a 25-vard jaunt in the Buckeyes’ win over Wisconsin … also caught three passes and had one kickoff return (33 vards) … appeared in 11 games (he did not play against either Washington or Northwestern) … won the No. 2 spot tailback spot midway through the season after a tough battle with another true freshman, Jermon Jackson … good young prospect … has added 15 pounds since last year.

High School: Honorable mention All-America by USA Today, and All-America by Tom Lemmings’ Prep Football Report … a first team all-Ohio selection at running back and the district co-offensive player of the year … a two-time Cleveland Plain Dealer All-Scholastic Team pick … selected to the Detroit Free Press’ Best of the Midwest top 20… rushed for more than 1,500 yards and averaged 7.6 yards a carry as a senior, when Euclid went 11-1, won the Greater Cleveland Conference and advanced to the state playoffs … rushed for over 4,300 yards during his career … top games were 289 yards against Bedford as a sophomore and 263 yards vs. Barberton as a junior … gained 1,527 yards and scored 18 touchdowns as a junior when he was second team all-state … competed in the National AAU Junior Olympics in track as a junior, and placed in two relays at the 1994 state track meet … also played basketball … high school coach was Tom Bane.