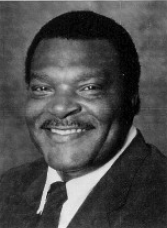 1992 Media Guide: Frank Falks is in his first season with the Buckeyes. The 49-year-old Faulks, now in his 25th year of collegiate coaching, will coach the running backs at OSU.

Prior to Ohio State, Falks spent five years as an assistant at Arizona State, one under John Cooper and the last four on Larry Marmie’s staff. In addition to coaching the Sun Devils’ running backs, Falks also served as assistant head coach during his last three years with Marmie.

Falks is a 1967 graduate of Parsons College. After a year as a graduate assistant there, he was named offensive coordinator in 1968. He remained in that role for two years before moving to Kansas State as offensive line coach in 1970.

In 1981 and ‘82, Falks coached the running backs at Oklahoma State, where his star pupil was Ernest Anderson, the nation’s leading rusher and an All-American tailback. In 1983, Falks was named running backs coach at Southern Cal. He left USC in 1987 to join up with Cooper at Arizona State.

Falks and his wife, Carol, have a son, Michael, and a daughter, Raegan.