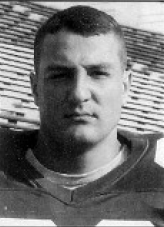 1994 Media Guide: Solid young football player… will back up All-America candidate Lorenzo Styles in the middle again this year … is capable of stepping in and excelling if called upon … hard hitting, aggressive player, who reads and reacts very well … takes great pride in wearing No. 36, the same number worn by former OSU linebackers Chris Spielman, Tom Cousineau and Marcus Marek .. . bothered by a series of headaches at the start of last season that limited his playing time … those headaches reoccurred in the spring and he was again held out of contact … hopes to have full medical clearance this fall.

1993: He and Alex Rodriguez lost out to Styles in a three-way battle to replace All-America Steve Tovar … wound up playing in just two games (Rice and Pittsburgh for a total of 11 minutes, eight of those minutes coming against Pitt … no tackles on the year, but did have a pass broken up against Pitt.

1993 Media Guide: Will be the starter at middle linebacker, replacing three-year regular and two-time All-America Steve Tovar … aggressive, intelligent player, who reads defenses well and has excellent lateral movement … played three minutes in the season opener with Louisville last fall, but broke his right leg three days later in practice (Sept. 8) and missed the remainder of the year … worked hard in the offseason to rehab his leg and was full-go in the spring … always around the ball … blue-collar type of player who enjoys the game … takes pride in the fact that he wears the same number as former OSU greats Tom Cousineau, Marcus Marek and Chris Spielman … excellent young prospect.

1992 Media Guide: A first team all-Ohio pick and Division II Lineman of the Year … an All-America pick by SuperPrep and an honorable mention choice by USA Today and Street & Smith’s … was District Player of the Year by both the Akron Beacon Journal and Canton Repository and the county Co-Player of the Year along with Buckeye freshman Travis McGuire … helped team go 13-1 in 1991 and finish as state runner-up … squad advanced to the regional championship game in 1990 … totaled 133 tackles, with 12 quarterback sacks, two interceptions and two fumble recoveries as a senior … recorded 22 tackles in the state title game … also played running back and gained 1,468 yards and scored 23 TDs as a senior … was an outside linebacker as a junior before moving inside as a senior … played basketball his first three years in high school but did not participate as a senior … high school coach was Jeff Durbin … undecided on a college major … born 12-31-73.