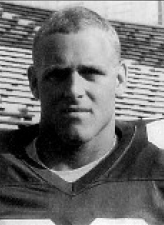 Post-OSU Update: Calhoun went undrafted in the 1997 NFL Draft and did not play in the NFL, despite spending time with the Giants and the Jags. He is currently a Managing Director for Eddie George’s wealth management company in Dublin, Ohio. (updated Jan. 2022)

1996: Played in all 12 games and started nine times, including the Rose Bowl (non-starts were the result of different offensive sets) … used mostly as a blocker … wound up with six caries for
16 yards … also had six receptions for 26 yards, with three of those grabs resulting in touchdowns … TDs came against Notre Dame, Penn State and Minnesota … long run of the year was eight yards at Notre Dame.

1996 Media Guide: Fifth-year senior … has been a key reserve at fullback the past two years, playing in 25 of Ohio State’s 26 games and starting five times … started the first two games last
year (Boston College and Washington) and had a career long 27-yard run against BC … came in against Tennessee in the bowl game and played well when starter Nicky Sualua was on the sideline with an injury … wound the year up with 32 yards on three carries … longest playing stint was 17 minutes against Illinois … has been used primarily as a blocker throughout his career and has just 12 carries … has made the most of his opportunities, averaging 5.9 yards per carry … tough, hard working player who is always ready when called upon … also plays on the special teams.

1995 Media Guide: Expected to be the backup fullback in the fall … played in 12 games games last year for a total of 74 minutes … started the Pittsburgh, Houston and Northwestern games after Alex Rodriguez was forced to give up football because of a spinal cord condition … was used mostly as a blocker, but ran hard and well when given the chance, netting 20 yards on four carries … top game was 11 yards on two carries versus Houston … slowed by a shoulder injury the last half of the season … underwent surgery on that shoulder (his right) following the bowl game and missed spring practice … should be ready to go in the fall… he and Nicky Sualua are the only two true fullbacks on the OSU roster, so his return is essential from a depth standpoint.

1994 Media Guide: Could be in line for playing time this season with the departure of last year’s top two fullbacks … a powerfully built player who could develop into a fine blocker … will battle with senior Alex Rodriguez and redshirt freshman Nicky Sualua for the starting role.

1993: Played in nine games for a total of 25 minutes … longest stint was eight minutes at Pittsburgh … saw most of his action as a member of the specialty teams … carried the ball five times for 24 yards and scored his lone touchdown on a one-yard run in the opener against Rice… had an 11-vard run at Pittsburgh and rushed for 12 yards on two attempts in the Big Ten opener against Northwestern.

1993 Media Guide: Enrolled at Ohio State Spring Quarter of 1992 after graduating early from high school … was redshirted last season but showed some promise in practice … coaching staff was very pleased with his progress during spring drills, and he could see some playing time this fall behind seniors Jeff Cothran and William Houston … has especially improved his blocking, and may be utilized in short yardage situations as un extra blocker … very strong, compact player … gained eight yards on a pair of carries in the spring game.

High School: Calhoun rushed for 1,387 yards and 20 touchdowns as a senior … was selected second-team Division V all-Ohio and first team all-district and all-league … a preseason All-America selection by Blue Chip magazine … rushed for over 2,500 yards during his prep career … an outstanding blocker … also played linebacker in high school and had 160 total tackles as a senior … started all four seasons as a prepster … high school coach was Pat Purcell … admires Archie Griffin … born 3-24-74.