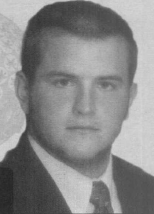 2003 Season: Kyle Andrews had another stellar season and played an integral part in Buckeye punter B.J. Sander winning the 2003 Ray Guy Award … started all 13 games … OSU coaches named him the special units player of the week following the Northwestern game.

2003 Media Guide: Kyle Andrews returns for his second year as the starting long snapper … does all the centering on punts and placements … is extremely accurate and gets good velocity on the ball … went through the entire 2002 campaign with NO errant snaps … played a key role in the success of last year’s kicking game (one of the best in the country) and is being counted on to do the same again this year … a former walk-on who was rewarded with a scholarship at the end of last season.

2002 Season: Took over the long snapping duties and did an exceptional job … started all 14 games as the Buckeyes’ long snapper … certainly instrumental in the success of All-Americans Andy Groom (fourth nationally in punting) and Mike Nugent (seven school field goal records).

High School: Played defensive tackle as a sophomore and junior and moved to defensive end his senior year … earned second-team all-league and honorable mention All-Southwestern Ohio honors as a senior.

Personal: His parents are John and Judy Andrews.