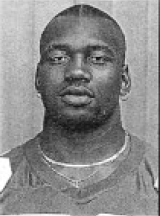 1997 Media Guide: Expected to start at the back position … was a starter two years ago, but was held out last year after Andy Katzenmoyer’s rapid development in the middle allowed Greg Bellisari to move outside … rather than use Johnson in a reserve role and waste a year, the OSU coaching staff redshirted him … has added 10 pounds and improved his strength and speed since last year … gives the Buckeyes a proven player to plug in at Bellisari’s old spot.

1996 Media Guide: The probable starter at boundary linebacker … started 12 games there last season and finished the year as the Buckeyes’ fourth leading tackler with 65 total stops … transferred from Northeast Oklahoma A&M in the spring of 1995 and began last year as the backup to Jerry Rudzinski … was thrust into the starting lineup when Rudzinski suffered a stress fracture during a practice drill on the Monday after the season opener with Boston College and was the regular the rest of the way … showed steady improvement during the course of the year and played his best football in November … recorded a career-high 11 tackles against Penn State and later matched that number at Michigan (he led the team in both of those games) … was selected by the OSU coaching staff as co-defensive player of the game against Indiana … had five tackles for loss on the year … also had a fumble recovery against Washington and a fumble caused against Purdue.

1995 Media Guide: Enrolled at Ohio State at the start of the 1995 spring quarter … a transfer from Northeast Oklahoma A&M where he helped the Golden Norsemen to a two-year record of 20-2 … heads into the fall as the backup at the Buck (strong side) position … physical player who will help boost the depth at linebacker.

High School: A four-time all-state pick at linebacker … played tight end and fullback on offense … also lettered in track and basketball, earning three letters in each.

Personal: Only loss his senior year at Northeast Oklahoma was an overtime setback in the finals of the national junior college championship … highly recruited after two very productive years at A&M … likes to play basketball, shoot pool and watch TV in his leisure time.