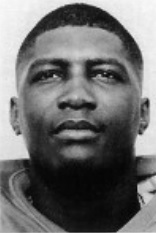 1989 Media Guide: Tim Rutledge figures to be a solid backup on the left side … coming off a good spring … physical player with good speed … versatile enough to play either inside or out … good athlete who will also be used on the specialty teams … a potentially promising defensive back.

1988: Totaled 26 minutes in eight games … saw most of his action on the kickoff teams and had three tackles .

1988 Media Guide: A potentially promising cornerback who sat out last year … has excellent speed, quickness and timing … expected to contend with Vince Clark for the backup spot behind Dwight Smith … in addition to being a standout safety in high school, he also returned punts and kickoffs.

High School: All-Ohio as a senior and a two-time all-city choice … helped East to a 9-1 record his senior year … voted East High’s “Most Valuable Player” in 1986, an unusual honor for a defensive back … started four years at safety … also lettered four times in basketball … played in the North-South All-Star Game.