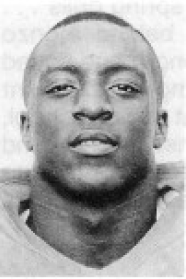 Post-OSU Update: Vinnie Clark was selected with the 19th overall pick in the first round of the 1991 NFL Draft by the Green Bay Packers. Clark played six seasons in the NFL (83 games and 59 starts) for four teams. He finished his NFL career with 280 tackles and 13 interceptions. (updated: Nov. 2022)

1990: Media Guide: Will be the starter at left cornerback … spectacular athlete with all-league potential … coming off his best year and should be one of the team’s defensive leaders in the fall. . . his forty time (4.36) makes him one of the fastest players ever at Ohio State … also has a 32-inch vertical leap .. . plays excellent man coverage … Started six games as a sophomore and 11 last year… had a career high 59 tackles last season… also had three interceptions and four passes broken up… high school teammate of Carlos Snow.

1989: Started every game but Indiana … one-handed interception at Michigan set up an OSU field goal… fourth on the team in tackles.

1988: Broke into the starting lineup against Indiana and started six of the last seven games … had 43 tackles, including eight at Michigan State and seven against Michigan … had his lone interception against Minnesota … tied for the team lead in passes broken up (4).

1988 Media Guide: Will be tried initially at cornerback, but can also play safety … a very highly regarded athlete who is expected to make an immediate contribution this year after sitting out last year.

HIGH SCHOOL: Helped lead CAPE to back-to-back state titles .. . a two-time all-Ohio selection as a defensive back . . . also played flanker and caught the winning touchdown pass in the state championship game as a senior … started four years and his teams finished 9-1, 9-1, 14-0 and 13-1 … on defense, he played cornerback as a freshman and safety the final three seasons … won nine high school letters … a high school teammate of OSU tailback Carlos Snow.

PERSONAL: Wants to teach and coach football after his playing days are over . . . enjoys all sports, particularly tennis … favorite actor is Sylvester Stallone … favorite movies are Color Purple and Platoon.