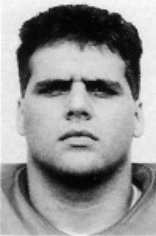 Post-OSU Update: Tim Moxley was selected in the 9th round of the 1990 NFL Draft by the Washington Redskins. Moxley never played in the NFL, but did play Arena Football in 1992. (updated: Nov. 2022)

1989 Media Guide: Tim Moxley is in his second year as a starter at strong tackle … moves extremely well for a player his size … a punishing run blocker … still a diamond in the rough in many respects … increased strength from a year ago should make him even more formidable … has impressed the OSU coaching staff with his work ethic and desire to make himself a better football player … an intelligent player who rarely makes mistakes.

1988: Started all 11 games and was a fixture at strong tackle, averaging 27 minutes a game and finishing second on the team with 301 total minutes.

1987: Began the season as a reserve, but was thrust into the starting lineup at right tackle when John Peterson dislocated his elbow … started seven of the last eight games and improved steadily during that stretch … logged a total of 235 minutes.

1987 Media Guide: Will contend with Jay Shaffer for a starting tackle berth on the right side.

1986: Saw brief action in all 13 games, logging a total of 87.5 minutes … showed steady improvement once he was able to shake off a series of injuries.

1985: Underwent knee surgery and was redshirted.

High School: Played defensive tackle for three years and did not play any offense until his senior year … a two-time state wrestling champion and the third ranked heavyweight wrestler in the nation as a senior.

Personal: An older brother, Don, wrestled at Ohio State and won the Big Ten heavyweight crown … hobbies are hunting and fishing … has not wrestled in college but his ambition is still to be an Olympic champion … admires Jack Lambert.