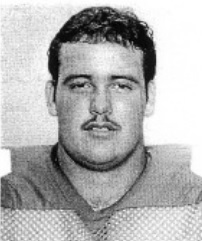 1987 Media Guide: His consistent and dependable play last season make him a likely starter this year … must guard against weight.

1986: Took over a starting role the ninth game of the season, when Larry Kotterman suffered a knee injury … played a total of 185.5 minutes in 1986 and only one minute in previous two years … made a perfect block, sealing off two would-be tacklers that enabled Vince Workman to score a 46-yard touchdown against Michigan.

1986 Media Guide: Made considerable progress in spring drills … pleasant, outgoing and eager to learn … must guard against excess weight.

1985 Media Guide: Will contend for a regular tackle spot on the right side … showed definite promise in spring drills … the tallest and heaviest man on the squad.

High School: Won nine letters at Boardman High … a three-year starter at Boardman High, where he played both offense and defense … captained the football and wrestling teams … had a 17-1 wrestling record as a senior.

Personal: Hobbies are boating and fishing … admires Lyle Alzado of the NFL.