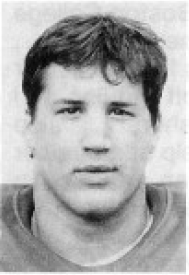 1991 Media Guide: The Buckeyes’ most experienced defensive lineman with 19 straight starts to his credit the past two years … blue collar player who gets it done with desire and hard work … fnished fourth on the team in tackles last year with 65 … registered a career-high 10 tackles against Air Force in the Liberty Bowl and had 9 vs. USC last year … finished the year with five tackles for losses and a quarterback sack … logged 250 minutes of playing time in 1990, the fifth highest total on the defense and tops among OSU’s defensive lineman … wants to teach and coach after graduation … wrestled heavyweight for the Buckeyes last winter, joining the team midway through the season.

1990 Media Guide: The 1990 season will be his first as a full-time starter … Started the final seven games last year after Mike Showalter suffered a broken arm .. . finished the season with 40 tackles, including 3.5 tackles for losses … played very well at the end of the season and carried that performance over into the spring. . . tough, strong and aggressive . .. excellent work habits and learns very quickly.

1989: Played in all 12 games and had a career high eight tackles against Wisconsin.

1989 Media Guide: A very highly regarded young player … one of just three true freshman to play last year, seeing action in all 11 games … will play behind senior Srecko Zizakovic this year … has great work habits and gives great effort day-in and day-out … tough, aggressive and has a great attitude … has caught on very quickly.

1988: Played behind Derek MacCready and had 11 tackles … three tackles against both Pittsburgh and Indiana were his top efforts.

PERSONAL: Is considering a career as a high school history teacher after college.