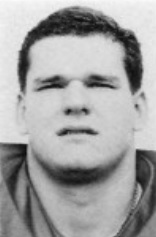 1989 Media Guide: The Buckeyes’ most experienced defensive lineman … hard worker who will start at tackle and should be a leader up front … started the first three games last year, but sprained an ankle in warm-ups before the Illinois game and missed the last eight games of the season, a very costly loss for the OSU defense … started a combined total of 11 games his first two years … good pass rusher.

1988: Had 16 tackles before being hurt, including nine in the LSU game.

1988 Media Guide: Won a starting spot in the spring … a hard-nosed, physical player … has greatly improved his strength since his freshman year.

1987: Started five of the 11 games he played in and had 24 tackles … top game was nine tackles against Michigan State.

1986: Injured his leg prior to the season but still enjoyed a solid freshman year, playing in 12 of the 13 games (152 minutes) and starting six times … finished the year with 13 tackles.

High School: A Parade and ADIDAS All-American … two-time all-state pick and one of the most highly recruited defensive lineman in the country … a three-year starter at Bay Village, where his career statistics included 112 solo tackles, 87 assists, ten passes batted down, five fumbles recovered and two blocked punts.

Personal: Hobbies are golf and tennis … admires Chip Banks and Richard Dent of the NFL.