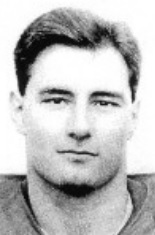 Post-OSU Update: After Ohio State, Srecko Zizakovic played six seasons in the CFL, all with the Calgary Stampeders. After football, he has worked mostly in sales. (updated: Nov. 2022)

1989 Media Guide: Started all 11 games at outside linebacker last year, but will play a down position this year, replacing fellow Canadian Derek MacCready as the starting end … did play some defensive line as a sophomore so his present position is not entirely new to him … figures to be one of the Buckeyes’ top defensive players this year … intelligent athlete who is very sound technically and spends hours studying film in an effort to improve.

1988: Made the most of his first chance to start by recording 44 tackles, including four sacks … top game was eight tackles against Wisconsin, two of those for losses.

1988 Media Guide: Moved from defensive tackle to outside linebacker midway through spring practice and immediately made a favorable impression … if he continues to show progress, he will see a lot of playing time this fall … has the size and speed to excel at both rushing the passer and dropping off on pass coverage.

1987: Divided his time between tight end and defensive tackle but did not see any playing time.

1987 Media Guide: Was moved to tight end midway in 1987 spring drills … has the size, hands and determination to become a good tight end.

1986: Played in eight games as a reserve tackle.

1985: Enrolled in the spring and took part in spring drills, but was redshirted the following fall.

High School: Lettered in football, basketball and rugby … in addition to playing tight end and defensive tackle, he also handled all the punting and placekicking chores on the football team.

Personal: Nickname is Zeke … enjoys listening to all types of music, from heavy metal to jazz … specializing in hotel and restaurant management and hopes to open a chain of sports-oriented restaurants after his football career is over … admires Jack Lambert and Lyle Alzado.