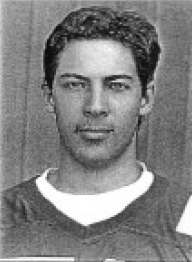 1995 Media Guide: Walked on last fall as a punter … heads into this fall as a leading contender to succeed Scott Terna as the starter, but will have to hold off the anticipated challenge of incoming freshman Brent Bartholomew … got most of the work last spring because the Buckeyes’ other punter, Mike Malfatt, divided his time between placekicking and punting … punted the ball consistently all spring.

Other: ATV junkie who enjoys watching sports on television … an aunt and uncle, Maureen and Jeff Kirschner, graduated from Ohio State and it was his uncle who taught him how to punt.

High School: Punted for two years … averaged 36.4 yards per kick as a Junior and improved to 38.2 as a senior … Miamisburg was 9-1 his junior year and 8-2 his senior season … played in a North-South area all-star game after his senior year and his team defeated the North squad, which included current Buckeye Dee Miller (Springfield) … played quarterback as a junior … lettered in basketball (two years) and baseball (one year).