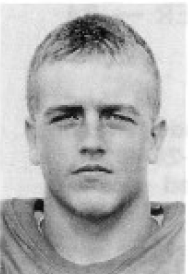 Post-OSU Update: After graduating Ohio State in 1993, Kirk Herbstreit joined ESPN in 1996 as a college football analyst. He is a color commentator for ABC/ESPN college football broadcasts and, starting in 2022, announces Thursday night NFL games for Amazon. (updated: Nov. 2022)

1992 Media Guide: Kirk Herbstreit nailed down the No. 1 spot in the spring and will be the starter in the fall … chosen as a co-captain following spring ball … appeared in all 12 games last year with starts against Washington State and Syracuse … completed eight of 13 passes for 158 yards and a touchdown against Washington State (his first collegiate start) and threw for 174 yards against Syracuse in the Hall of Fame Bowl … a long-time Ohio State fan who grew up dreaming of someday starting for the Buckeyes … an exciting athlete who has demonstrated a knack for scrambling out of trouble and turning apparent losses into big gainers … very popular with the players and a natural leader … logged a total of 125 minutes of playing time in 1991, with 49 of those minutes coming in his two starts … came off the bench at Illinois and again at Michigan to engineer impressive second-half drives … completed eight of 11 passes for 82 yards against Michigan … OSU’s sixth-leading rusher last year with 153 yards on 31 carries, an average of 4.9 yards per carry … spectacular 32-yard TD run against Wisconsin last year was surpassed only by an even more spectacular 72-yard scoring jaunt at Minnesota … also the Buckeyes’ holder for field goals and extra points … has a good understanding of the OSU offense.

1991 Media Guide: Played well enough in the spring to make the battle for the starting quarterback’s position an on-going contest … option-type QB who has improved as a passer … good scrambler, who often gets something out of nothing … very competitive player … only pass last year was after a botched extra point attempt … only game action at quarterback was against Boston College … the Buckeyes’ holder on placements … played on the kick coverage squad last year.

1990 Media Guide: One of two extremely capable backup quarterbacks in the Buckeye camp … improved his stock tremendously in the spring, especially as a passer … excellent athlete and the most agile of the OSU quarterbacks … ran a wishbone in high school and is a good scrambler … has had to learn to stay in the pocket at OSU … a winner … highly recruited in high school, but always wanted to play at Ohio State, where his father, Jim, both played and coached … committed to OSU on Dec. 31, 1987, shortly after John Cooper was announced as the Buckeyes’ new head coach.

1989: Backed up Greg Frey, but played a total of just 27 minutes in the six games he appeared in … completed four of nine passes for 48 yards.

1989 Media Guide: One of three redshirt freshman vying to back up Greg Frey … excellent runner … ran a wishbone attack in high school, but has a good arm and throws particularly well on the move … good ball handler with excellent fakes … has the athletic ability to scramble out of trouble … very highly recruited in high school.

HIGH SCHOOL: A Parade All-American and the Ohio Player-of-the-Year as a senior … threw for 1,298 yards and 10 TDs as a senior … also rushed for 576 yards and 16 TDs his final year … career totals of 55 TDs and 4,258 yards in total offense in two years as a starter … led Centerville to a 10-0 record as a junior … all-league in baseball.

PERSONAL: Enjoys all sports … his father, Jim, played for the Buckeyes during the 1958, 59 and ’60 seasons and was on the OSU coaching staff in 1961 and ‘62 … the first player to commit to John Cooper, announcing December 31, 1987, the day Cooper was hired … strong Cincinnati Reds fan … hobbies are watching sports on TV, fishing and video games … nicknamed “Street” … is considering a major in business.