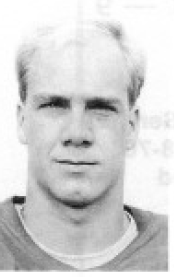 1990 Media Guide: Veteran, poised quarterback who returns for his third year as a starter … led the conference and was 10th nationally in passing efficiency last year with a rating of 145.7 … won second team all-Big Ten honors in 1989 … good leader and a heady player, who makes good decisions and has the ability to audible out of a bad play … control-type passer … has started every game the past two years … career totals are 4,254 yards passing and 21 touchdowns … ranks fourth on the OSU career passing chart and could jump up into second place this year … another 2,000-yard season would make him the first Ohio State signal caller ever to throw for that figure three years in a row … skipped practice last spring and played baseball, starting in left field and hitting .293.

1989 Media Guide: Beginning his second year as OSU’s starting signal caller … drop back passer, who can also throw on the run … heady player who makes good decisions and moves the team … has a good understanding of the OSU offense and showed improvement in the spring in taking when the defense gives him instead of forcing the ball … played much of last year with a tendinitis condition in his throwing arm but still put up some impressive numbers.

1988 Media Guide: Solidified his position as the starting quarterback with a strong spring … has quickly grasped the new offense … impressed the coaches in the spring with his ability to move the team … voted the most improved offensive player at the end of spring drills last April.