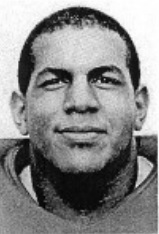 1989 Media Guide: Karl Coles emerged from spring practice with a slight edge over John Peterson in the battle to replace Greg Zackeroff at strong guard … an excellent athlete … probably OSU’s strongest guard … good run blocker … has played both guard and tackle at OSU and can play either the quick or strong sides at both of those positions … has the potential to be very good … has added more than 40 pounds since his freshman year.

1988: Moved from guard to tackle in the spring and entered the fall as the Buckeyes’ third tackle … played in the opener against Syracuse, but subsequently suffered a knee injury and did not play again the rest of the year … moved to guard in the spring.

1988 Media Guide: Moves from guard to tackle this year to take better advantage of his size … will play behind Tim Moxley on the strong side … has the athletic ability to play the quick side if necessary … has added 20 pounds since last year … has great physical tools.

1987: Started eight games at left guard, the last seven after Jeff Davidson broke his leg at Illinois … played well as a starter, but with Davidson and Zackeroff both returning in 1988, he was shifted to tackle in the spring.

1987 Media Guide: A second team guard who played behind Zackeroff in 1986 … has considerable athletic ability and needs only experience to become a standout.

1986 Media Guide: Entered Ohio State in the fall of 1985 but did not see any game action … began as a defensive tackle but moved to offensive guard in the spring of 1986 … a broken hand limited his play … strong physically and has good quickness.