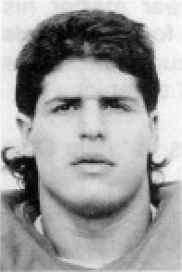 1991 Media Guide: The Buckeyes’ most experienced inside linebacker … has played in all 32 games the past three years and has 12 starts (all in 1989) to his credit … will contend with Tom Lease for the inside spot opposite Steve Tovar … OSU’s No. 3 linebacker last fall, finishing with 38 tackles … top showing was eight tackles against Wisconsin … also had a team-high six stops against Northwestern … had his second career interception in last year’s season opener against Texas Tech … not real big as linebackers go, but tough and very competitive … has worked hard to condition himself for the rigors of Big Ten football.

1990 Media Guide: Thrust into a starting role last year when Andy Gurd underwent surgery … started all 12 games and finished third on the team in tackles with 65 … OSU’s leading returning tackler … will compete with Gurd and Tom Lease for a starting spot this year … aggressive player who runs to the ball well … bothered by neck stingers much of last year and coaches would like to see him add 10-15 pounds to help alleviate that problem … played at the same high school as Gurd.

1989 Media Guide: Played in eight games last year, one of just three true freshman to see action … an aggressive player with outstanding ability who will improve with experience … coaches would like to see him add 10-15 pounds and become more physical … moved from the weak to the strong side late in the spring and adapted very well.

1988: Wound up his rookie campaign with 16 tackles, including 12 solos … top game was four tackles at Pittsburgh.

HIGH SCHOOL: Consensus All-American and all-Ohio as a senior … had 180 tackles as a senior and 578 during his career … totaled an incredible 279 tackles as a junior, believed to be a national high school single-season record … Kenston advanced to the state finals his junior year, losing in the championship game to Carlos Snow’s Cincinnati Academy of Physical Education … hobbies include skiing and hunting … career objective is either coaching or sports marketing.