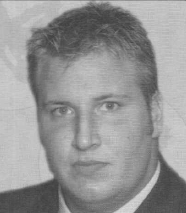 2004 Media Guide: John Conroy is a fourth-year walk-on who will provide depth at guard … can play either side, but goes into the fall listed on the left side with Doug Datish and Andree Tyree … also plays on special teams (field goal unit) … has steadily improved in all aspects of the game … has not seen any game action to date and is hoping to make his initial appearance this year … one of three walk-ons on the offensive line who could contribute … recruited by Illinois and Purdue, along with several Mid-American Conference schools, out of high school , but began coming to Ohio State games in 1988 and wanted to follow in the footsteps of his father, a former walk-on for the Buckeyes.

2003: Played on the scout team, but did not see any playing time.

High School: Played two years and started at tackle as a senior … also a four-year letter winner as well as a two-year starter – in lacrosse.

Personal: Is the son of Jim and Bonnie Conroy … his father was a walk-on with the Buckeyes during the 1968 to 1970 seasons, so both he and his father were members of national championship teams … his older brother, Jim, has his undergraduate and master’s degrees from Ohio State and his younger brother, Tim, is on the crew team at George Washington … likes to fish, play golf and snow ski.