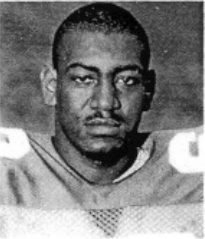 1987 Media Guide: Will challenge for a backup role behind either Kumerow or Isaman … much heavier and stronger than when he first enrolled … entered Ohio State in 1985 but saw no game action.

High School: An all-Ohio defensive end from Middletown in 1984 … UPI “Defensive Lineman of the Year” in 1984 … top football thrill came when he intercepted a pass and returned it 35 yards against rival Princeton High.