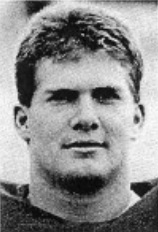 Post-OSU Update: Derek Isaman had a professional boxing career after leaving Ohio State. He won his first 12 fights before suffering his first (and only) defeat. He finished his career 15-1 (9 KOs). After sports, he began a long career in the shipping/logistics industry. (updated: Nov. 2022)

1989: Derek Isaman returns to football after taking the 1988 season off to try out for the U.S. Olympic boxing team, where he finished as an alternate in the heavyweight division … spent his first three years at Ohio State as an outside linebacker, but was moved to the inside last spring and is expected to start this fall … tough, physical player who in the past has demonstrated a knack for always being around the ball … very good at pass coverage … worked hard in the spring to learn the position and make up for the year layoff.

1987: Began the year as a starter, but a neck injury forced him out of the lineup and limited his playing time … 21 tackles in 10 games.

1987 Media Guide: An excellent all-around athlete who combines desire, speed and strength … difficult to block because of his quickness and body balance … equally strong against the run or pass.

1986 Media Guide: Impressed the Buckeye coaching staff as a freshman with his intelligent, aggressive play … figures to start this year … missed half of spring practice with a fractured thumb.

High School: Earned all-Ohio honors and was named to the National High School Coaches Association All-American team at outside linebacker as a senior … also played wingback and tight end as a senior … helped Ross to the state playoffs as a junior … team captain as a senior.

Personal: Boxed in high school and lost, by decision, to Mike Tyson in the semi-finals of the national Golden Gloves … his father, Bill, is a former amateur boxer and served as his coach … admires Sugar Ray Leonard and Lawrence Taylor.