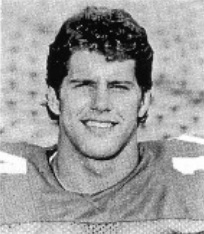 Post-OSU Update: Eric Kumerow was a first-round pick (16th overall) of the 1988 NFL Draft by the Miami Dolphins. He played three years in the NFL, all with the Dolphins, recording 5.0 sacks and an interception in 42 games. His brother-in-law is John Bosa, the father of Ohio State greats Joey and Nick Bosa. (updated: Nov. 2022)

1986: A 1986 first team all-Big Ten selection by both AP and UPI … Big Ten Radio Broadcasters Association voted Eric the “Top Defensive Lineman in the Big Ten” in 1986 … made 66 tackles on the season, including nine for a loss … his best game came against Iowa, when he had eight solo tackles, including one quarterback sack, and batted down one pass, earning him “Defensive Lineman of the Week” honors.

1985: A regular in 1985 who became a standout defender by the end of the season … led the team with ten lost-yardage tackles, including a team-high of six quarterback sacks … intercepted one pass, batted down three, recovered one fumble and caused another.

1984: Would’ve been a starter, but a painful heel bruise restricted his play.

1983: Came to Ohio State as an All-America quarterback, but asked to move to defense as OSU prepared for the 1984 Fiesta Bowl Game.