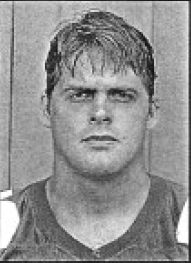 1995 Media Guide: Traded his baseball spikes for a pair of football cleats last fall, enrolling at Ohio State in mid-September on a football scholarship and ending a three-year stint as a catcher with the Toronto Blue Jays’ organization … came out of spring practice as the backup to Ryan Miller at the will (weak side) position … tough, competitive football player who has been away from the game for three years but has not lost any of his intensity.

Other: Recruited by Ohio State in high school, but chose to play baseball … played one year in the rookie league and two seasons in Class A before deciding to give up baseball and attend college … undecided on a major at this time, but thinks he would like to teach and coach after graduation … Pete Rose and Chris Spielman are two of his sports heroes.

High School: Played three years at Elder and was a two-year starter at linebacker … Elder was 10-1 his senior year and he was player of the year in the Greater Cincinnati League … three-year starter in baseball, winning all-state and Ohio Player of the Year honors as a senior.