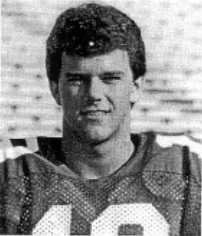 1987 Media Guide: After three years of being Ohio State’s regular punter and a backup quarterback, Tom Tupa is ready to take over as starter … his ability to scramble adds a dimension to the Buckeye offense … has a strong, accurate arm … a key player for the Buckeyes in 1987 because he is the only quarterback with college experience … the finest punter in Ohio State history, averaging 43.7 yards per punt over three seasons … elected a captain in 1987.

1986 Media Guide: The top quarterback replacement behind Karsatos … completed seven of 13 passes in 1985 … has good mobility … an outstanding punter who averaged 47.1 yards in 1984 and 41.8 last year … led the nation in net punting as a freshman with an average of 44.1 yards per kick … will be Ohio State’s best punt ever if he can maintain his present 44.3 average.

1985 Media Guide: Will challenge Karsatos to start at quarterback … impressive in the two spring games, completing 30 of 46 passes for 317 yards.

High School: Quarterbacked Brecksville High to a state championship in 1983 … averaged 20.8 points per game and 12 rebounds his senior year in basketball … was a pitcher and shortstop in baseball.