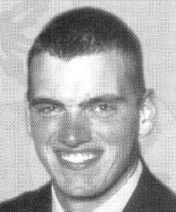 2004 Media Guide: Steve Winner is one of three walk-ons who have played their way on to the depth chart … could be the backup center in 2004 if he continues to progress … coaches like his attitude and work ethic .. has good size and is an intelligent player … played guard and tackle his first two years at Ohio State before moving to center … has a good understanding of what’s going on … good shotgun center … originally walked on in 2001, but has not seen any playing time to date … based upon a solid showing in the spring, that could change this year … recruited by several Mid-America Conference schools, but his family are all Ohio State fans and he has always wanted to play for the Buckeyes.

2003: Played guard on the scout team, but did not see any game action.

2002: Played tackle with the scout team, but did not see any game action.

2001: Made the team as a walk-on tackle and redshirted.

Personal: Is the son of Larry and Cheryl Winner and Ted and Jennie Schaub … has two older siblings, Jen and Rob … hobbies include all types of music, fishing and playing golf … his brother is teaching him how to play the guitar .. would like to someday be a scratch golfer … his biggest thrill at Ohio State was running out of the tunnel the first time, followed closely by back-to-back trips to the Tostitos Fiesta Bowl.